Famous 19th Century scientist, Louis Pasteur, is well remembered as a founder of medical microbiology. After three of his children died of typhoid before reaching adulthood, Pasteur focused on trying to understand the cause and prevention of diseases.

He is best known for inventing a method to stop milk and wine from causing sickness, the process known as pasteurisation.

At the time people thought that spontaneous generation was responsible for the spoiling of food or beverages.  However, Pasteur demonstrated that fermentation is caused by the growth of micro-organisms contaminating the materials from outside, as spores on dust. This became known as Germ Theory.

Once this understanding was clearly established, the need to keep everything clean and germ free became fundamental to all experiments. To achieve this Pasteur invented the pipette to ensure that liquids could be removed from or transferred between vessels without introducing foreign elements that could contaminate the contents. This valuable tool became known as the ‘Pasteur pipette’, a term still widely used today.

Pasteur used long thin glass tubes cut into appropriate lengths. The ends were plugged with cotton wool to prevent any contaminants from entering. The centre of the tube was then heated until molten and quickly pulled apart to make a long and very thin tube between the larger ends. The tube was then snapped in half to create two fine tipped pipettes.

Such pipettes have been used in laboratories ever since and may also be referred to as transfer pipettes, bulb pipettes, dropper pipettes or teat pipettes. Perfect for selecting small samples of microorganisms to transfer to a new growth medium, they helped Pasteur to isolate pure cultures. The addition of a rubber teat made aspiration and dispensing of the sample, simple and very quick.

Pasteur’s glass pipettes have proven invaluable during many major biological discoveries throughout the 19th and 20th Centuries. However, their fragility and risk of breakage can be problematic.

The invention of plastics enabled the further progress of pipette development and wider usage in multiple applications.

In the 1940’s low density polyethylene (LDPE) was introduced and the blow moulding industry grew rapidly. Products could now be mass produced cheaply and quickly. 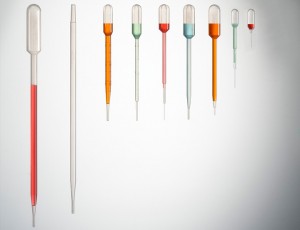 Plastic Pasteur pipettes, also referred to as transfer pipettes, have their stems and bulbs in the form of a single piece of moulded plastic. There are many generic and brand names on the market, but they are all manufactured by the blow moulding process.

The mould releases the item and often it is trimmed to remove any excess plastic from around the seam.A tube of molten LDPE is extruded and the metal mould (made in 2 halves) closes around the plastic, whilst a jet of air under pressure is blown into the plastic to force it to expand to the shape of the mould.

Disposable plastic Pasteur pipettes are made in a range of designs and sizes, each one adapted to perform a particular application in the laboratory, though many have numerous applications. They can include graduation markings for approximate volume measurements.

Plastic pipettes are mainly used in biological and medical applications where most liquids used are aqueous, and solvent resistance is not important. They are not suitable for use with organic solvents, such as hexane and acetone which would dissolve the plastic.

Click here to view the full range from Alpha Laboratories

Cookies are important to the proper functioning of this site. Besides the strictly necessary cookies, we also use cookies that provide aggregate non-personal analytics to help us understand how our website is used and how it performs. If you continue to use this site we will assume this is OK. OkPrivacy Policy