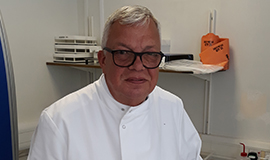 As part of the 40th anniversary celebrations for Pastette® we asked who has been using them the longest?

We have a winner!

Congratulations to Bob Jones, BMS Professional Manager from the Department of Microbiology and Infection Control at Victoria Hospital, Kirkcaldy.  He has been using Pastette for 38 years!  So, he was one of the very first users not long after Alpha Laboratories pioneered the introduction of plastic disposable transfer pipettes
(pasteur pipettes) into the European market!

I have been using Pastettes since the 1980’s after moving over from homemade glass ones (quite a tricky and dangerous practice). We thought these new plastic disposable items were a godsend. Working in a microbiology laboratory they were used in abundance for many things.   Jumbo Pastettes were used for removing sediment from early morning urine for TB examination.  Fine Tip Pastettes were used for filling cell counting chambers with CSF.  The serology section was probably the biggest user, transferring serum and plasma from centrifuged blood containers into tubes and vials.
Bob Jones, Victoria Hospital

We visited Mr Jones to find out more….

We asked what problems were his team experiencing before they started using Pastette?

We were making our own glass Pasteur pipettes – quite a tricky and hazardous procedure. Glass tubing was heated using a Bunsen burner and when hot enough, “pulled” to make 2 pipettes. These often shattered during the process.

Used pipettes were placed in a pot of disinfectant then rinsed and washed, dried in a hot air oven, “plugged” with cotton wool (as a filter) and sterilised in an autoclave.

Larger graduated pipettes were made of glass which were easily cracked and had a limited life because of exposure to disinfectants / cleaning and autoclaving. Large pipette bulbs were not in abundance therefore mouth pipetting was not uncommon.

What was the motivation to change from using glass pipettes?

How did you find out about Alpha Laboratories’ Pastette?

Why did you choose Alpha Laboratories’ Pastette?

What were the most important benefits of the introduction of Pastette?

Would you recommend Alpha Laboratories’ solution to other businesses? If so, why?